In on-going discussions about the weaknesses of coursebook-driven ELT, references are made to two types of syllabuses: synthetic and analytic. The distinction was first made by Wilkins (1974), and ammended by Long and Crookes (1992). There seems to be some confusion about them, so here’s a summary of what Long (2015) says. My apologies to Mike for the awful liberties I’ve taken with his much more carefully written text.

‘Synthetic’ and ‘analytic’ refer to the learner’s role in the learning process.

A synthetic approach focuses on the language to be taught (the L2). The L2 is divided into units: words, collocations, grammar rules, sentence patterns, notions and functions. These units, or items, are then sequenced according to criteria (normally intuitively defined ‘difficulty’) and presented one by one.

Synthetic syllabuses assume a central role for explicit instruction and explicit learning, followed by proceduralization of declarative knowledge, and automatization of procedural knowledge. Language teaching is seen “as a process of filling the learner’s linguistic quiver one shiny new arrow at a time” (Long, 2015).

Students are exposed to “simplified” dialogues and reading passages “seeded” with the structure(s) of the day. Practice of the structure(s) is followed by “freer practice”. The approach relies on a battery of exercises, and linguistically focused tasks for intensive practice during the proceduralization and automatization phases. 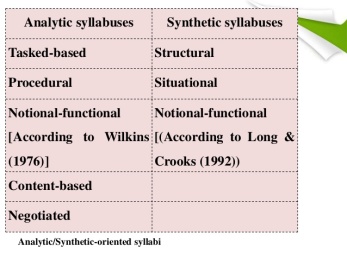 An analytic approach does the reverse. It starts with the learner and learning processes. Students are exposed to samples of the L2, and engaged in meaningful target language production. The learner’s job is to analyze the input, and thereby to induce rules of grammar and use. There is no overt or covert linguistic syllabus. More attention is paid to message and pedagogy than to language. The idea is that, much in the way children learn their L1, adults can best learn a L2 incidentally, through using it.

Analytic syllabuses are implemented using spoken and written activities and texts, modified for L2 learners, chosen for their content, interest value, and comprehensibility. Classroom language use is predominant. Grammar rules, drills, and error correction are seldom, if ever, employed. 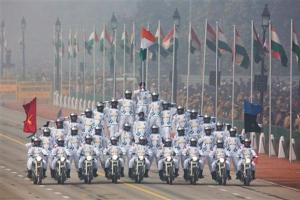 Skill-building models contradict research findings on interlanguage (IL) development. IL development of individual structures has very rarely been found to be linear. Accuracy in a given grammatical domain typically progresses in a zigzag fashion, with backsliding, occasional U-shaped behavior, over-suppliance and under-suppliance of target forms, flooding and bleeding of a grammatical domain (Huebner 1983), and considerable synchronic variation, volatility  (Long 2003a), and diachronic variation.

The assumption of synthetic syllabuses, that learners can move from zero knowledge to mastery of formal parts of the L2  one at a time and move on to the next item on a list is a fantasy.

Explicit instruction in a particular structure can produce measurable learning. However, studies that have shown this have usually devoted far more extensive periods of time to intensive practice of the targeted feature than is available in a typical course. Also, the few studies that have followed students who receive such instruction over time (e.g., Lightbown 1983) have found that once the pedagogic focus shifts to new linguistic targets, learners revert to an earlier stage on the normal path to acquisition of the structure they had supposedly mastered in isolation and “ahead of schedule.”

IL development is regulated by common cognitive processes and what Corder (1967) referred to as the internal “learner syllabus,” not the external linguistic syllabus embodied in synthetic teaching materials. Students do not – in fact, cannot – learn (as opposed to learn about) target forms and structures on demand, when and how a teacher or a textbook decree that they should, but only when they are developmentally ready to do so.

In instructed SLA contexts, research (see, for example, Sok et. al., 2019; Kang, et.al., 2019) increasingly shows that following a grammar-based, synthetic syllabus is not as efficacious as using an analytic syllabus such as that recommended by Long (2015), which treats the L2 holistically and leads students through a series of scaffolded tasks where the focus is on meaning, and where focus on form is used to deal with problems which arise when the students indicate a need for it.